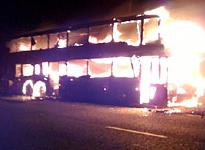 With just two weeks to go, Feeder have been added as a late addition to the Sonisphere festival bill, joining headliners Iron Maiden, Rammstein, Alice Cooper and Motley Crue in Stevenage, Knebworth.
Having released the album Renegades earlier this year, Feeder have promised a second, mellower, album to complement their first release of 2010.
August and October see the band partaking in a full British and Irish tour, including dates at the V Festival, Dublin and also Sonisphere.