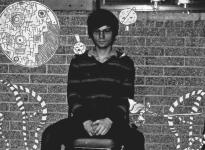 Randolph Chabot is the busily imaginative 23-year-old who is known in musical circles as Deastro.

Having experimented with sounds since his early teens, he recently released the sonic fantasy Moondagger based on a curiously lucid fairytale of a dream he had one night. Affected by a range of creatives starting from the Beach Boys and Johnny Cash and moving through to Depeche Mode, Sufjian Stevens and M83, Randolph and his newly acquired live band create some fascinating electronic soundscapes that acknowlege their more classic influences while embracing a brand new musical era.

You were a solo act till not too long ago. Who makes up Deastro the band and how do you know them?

The guys who make up Deastro are some friends of mine. We all grew up within a half mile of each other. They started playing with me about a year ago when I decided I needed some help pulling off the music I was making live. I still do almost all the writing but Brian (Connelly) has helped with a lot of the arranging on our newer songs that will come out in the fall sometime.

'Deastro' is the copyright-protecting namesake of a GI Joe villain, isn't it? Is the band a fan of the Real American Hero?

I am a fan of the original cartoon, I grew up going to this video store by my house and renting that and Transformers at least once a month. I am interested to see the new movie. I hope they don't botch it up.

Your on-stage setup looks insanely complicated. How difficult is it to replicate your recorded music in a live setting? How do you make a live performance a real 'performance'?

It was hard at first but now I am just used to it. I use Ableton Live and a Roland SP-404 to trigger the songs live. Our new stuff is moving pretty far from our sound on Moondagger though. I play guitar a lot more and the synths are more focused but sparse. We just play as hard as we can and try to mean the things we sing about.

You must get asked about your influences an awful lot, so how about this - what kinds of music have the least impact on your own?

You've been making music since you were twelve or thirteen. What were your sound-emitters of choice way back in the last century? Surely laptops were a bit harder to get hold of back then?

I made everything on a desktop computer and a Matrix Generator. I didn't even have a keyboard when I finished the first album I made when around 13. I have it on CD somewhere. A lot of that music sounded like a hooked on Bach trance album.

What music did you grow up listening to and what compelled you to try creating your own? What was your family's reaction to the strange sounds emanating from your room?

I grew up listening to Christian music. I was in love with bands like Me Without You, Pedro the Lion, Starflyer 59, Joy Electric, Danielson Family, Sufjan Stevens, Innocence Mission, and the oldies station here in Detroit, 104.3. I felt like I was called by God when I was a kid to write music. I don't know about that idea now - it sounds so sci-fi, but I'm into it, so, yeah. My mom has always got my music. She gets parts stuck in her head all the time and hums them around the house. My dad was more "it's too repetitive, do you have to play that part over and over and over again?". My family thinks I am really weird. I was watching Bollywood horror movies the other day and my little brother Phil was a little freaked out, but not really. I am really lucky, I have a great family.

You've accomplished quite a bit at a very young age. It's obviously not something everyone can do. What do you think worked in your favour to help you make it big? And what do you think stops other people from achieving what you have?

Charles Olson said something along the lines that our ideas of genius and achievement are outdated; that the person who "makes it," so to speak, is just tapping into this energy that is bigger than him or her. It sounds like the sequel to Altered States but I hear David Lynch talk about transcendental meditation all the time. I am just a cheerleader for all of the amazing things people do. We are a part of the whole. I think that the people who do something great are the ones who realise this and love - I mean really love - life.

Grime TIME, Disney, Jonas brothers wannabe, shoegaze music, made by half-mutant out-of-work mid-westerners, without money and with lots of time.

Quicker: promote/demote - why should or shouldn't people listen to Deastro?