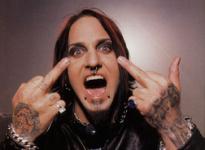 Dez Fafara sits lacing up his trainers in his trademark Black Flag T Shirt on the bands tour bus. Devildriver have just arrived in the UK and are ready for a week of headline dates with 36 Crazyfist's and Idiom in support. From Coal Chamber to Drug Addiction, Devildriver to Owls, Fafara has had a long and turbulent history in the Metal world.
With little introduction the questions begin.

Dez, good to see you, how's life? First night of the tour, do you have any opening night jitters?

Um, opening night, well we've been off the road now about four to six weeks so sure, we have some jitters, but anytime you're not nervous means you're not going to have a good show. Tonight the tour is starting, we came over here yesterday, we beat jet lag by just staying up until 10.30, 11 and I slept 12 hours and I couldn't be more than ready!

I think it's either in you or it's not. The road suits me well - I sleep better on the road. Don't get me wrong, I love my family, I have a beautiful wife and children. But in order to break an album, in order to do what we do, we have to work harder than anyone else to bring something to fruition. And we're finally seeing that starting to work with people coming to the shows. That's just how that goes.

Tell us about your latest album, Pray For Villains, obviously been out for well over a year now but tell us a little about the background to this release and what this album means to you?

It's a step, a different step for Devildriver, and me personally (lyrically) it's coming from the standpoint of story telling. And it debuted well in the United States and its doing really well overseas and we couldn't be happier with the way its going in that respect. I always managed to make different music, you know its Devildriver, but it sounds different – and we try to do that, we never try to make the same album twice. It's just good to give the bands a different side to us.

Pray For Villains was, in your own words, a less aggressive for the sake of being aggressive album and more an album to explore lyrics, song writing and musical composition. Would you still agree with that?

Yeah, we had these songs in us, and we just wanted to let them out. I like the way that we did and it's just another step in the development of Devildriver. We have another record, and that's in the can right now, and it's out next February. I think it's important to change and yet keep your identity. I think we shouldn't make the same record twice. I have a lot of bands that I'm a huge fan of but every record sounds the same. They stick to a formula that works. We don't tend to do that; we tend to be that little more daring.

So tell us about the concept of Pray For Villains, especially the relationship to Owls, with people saying Devildriver have made Owls "metal"?

I see a lot of people using the Owl recently; I seen Deftones use it on their cover, which is crazy. I've seen it in a lot of places since.

The way I got that is that my grandfather collected Owls and when he passed I was given his collection – I'm talking antique Owls from the 40's and the 50's and these beautiful pieces of artwork, and I started collecting myself. The Owl represents either good or evil wherever you go about in the world and with the concept of Pray For Villains it just works perfectly. The underdog theme is prevalent there.

First night of the tour, with 36 Crazyfists, what's it like to be touring with these guys?

We have toured with them a couple of times, so much so that almost everyone in the band has a little tattoo called the Bro Ship, with is like a little pirate ship to commemorate our antics together. And you would put where you're from on it, for example CA or UK and your area code – and love them as a band – they do their own thing in a time when many people don't.

As a band do you see yourself stopping?

No, I mean I'll eventually take a year off, but I don't see that happening for at least another ten or fifteen year's maybe. We run, if I'm not here then I'm playing in the States, or we're going overseas to Japan or Australia. So it's almost hard to cover the world in two years. And then you release another record and you have to go and tour another cycle to promote that one.

So looking at Coal Chamber, your previous band of course, you were once quoted in an interview as saying a return to Coal Chamber would be like "repeating the fourth grade" – do you still feel that way, will something ever present itself in terms of a reunion?

Em, you know, going backwards is a hard thing. Would it be a step forward? Don't know. Is it still enviable, real, to the point where people would come out? Don't know. Me personally, I'm friends with them again, which is a great thing. They are all off drugs.

I don't want to say never, but I don't see it right now, at any time. For me it's just great to be friends with them right now, Miguel came out to our last show in LA. And previous to that actually came out to my wife and children and apologised for the way he had acted in Coal Chamber and it was such a pleasure, to see that kind of humility in him. But that's that, what I did with Coal Chamber is what I did, and what I do with Devildriver is what I do.

So in terms of what you did in Coal Chamber, being a Nu Metal band, what do you think looking back on that genre?

Well eventually being in a Nu Metal band you're going to get a label. If you're on there for 10 years and you get a label, if it works it works, there are labels put on it so it just helps explain to people what we represented in a time or place. I think what we were in Coal Chamber were a young, ambitious, breed and doing something different.

Eventually we got lumped in with Korn, who we sounded nothing like, and had nothing in common with – except maybe a down tuned sound – and that sound didn't even come from Korn, it came from LA, where Korn weren't even from! It came from Fear Factory. Not Korn. Korn got that with Fear Factory. Who I'm great friends with as well, I have a lot of respect for those guys. It was a great time and a great genre and when I look back I see a lot of great bands like System Of A Down. Where are they? I wish they would come back out with something.

But so many killer bands came out of that time period it's just interesting to see who is still around and who is doing what.

So in terms of this tour, Devildriver are offering a Meet and Greet package, a chance for you guys to mingle with some fans backstage, can you tell us a bit more about that?

Yeah. They come in and pay a certain amount of money, they get a picture and a laminate and meet us at the bus, and they get to hear two new songs from the album that have yet to be released – this is the new album coming in February. And with the economy in the US being the way it is, it's necessary to generate some extra revenue from sources without segregating everyone, to make sure we can keep travelling. And to give them something extremely special and unique.

Finally, one question on my mind, I know that you were persuaded this year to come back on the road – wanting to take your first major break in years – by Sharon Osbourne and play the Ozzfest. Sharon is a persuasive woman?

She's the greatest. She's my mother in Metal. For those who don't know, I would hardly have a career if it wasn't for Sharon, she managed Coal Chamber and myself to the point at where we got. And she was the one who told me that I was going to have to leave Coal Chamber because they're going down the tubes with drugs.

And she probably maybe was behind Ozzy at that point in his life and had had a similar situation there too. She's a wonderful lady, and if you've ever met her, she's wonderful and caring a witty and just a genuine pleasure. And all the things that you wish to be around. I love that woman and I love that family.

Dez, it's been a pleasure. Thanks.