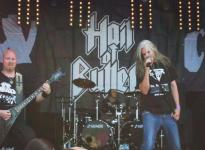 First and foremost guys, thanks for speaking with me. Your latest album On Divine Winds has been out for a few months now, are you pleased with the reception?

Very much so, the reviews were almost unanimously great, some even saying we managed to surpass our debut album which was extremely well received. So yes, couldn't be happier!

At this stage of an album's lifespan how do you think it has held up against your back catalogue - is that ever a consideration as you move from one album to the next?

I think it's a logical step in our development. It's instantly recognizable as the same band, the style hasn't changed drastically, but there is noticeable improvement in the songwriting and production departments. We felt some pressure to live up to expectations but at one point we decided to focus on making the best album we possibly could and not worry about pleasing anyone but ourselves.
Since we started this band as fans of a certain genre (old school death metal) we're able to judge our own music like a fan would, and it appears this worked out well. Once you start making an album you have to follow your gut instinct anyway, which is what we did.

What's the Metal scene like in Holland, what can you tell us about the response to the genre there?

I'd say it's healthy, but not nearly as healthy as it is in Germany, metal country par excellence. As soon as you cross the border you see a dramatic increase in metalheads. Holland is ok for metal, there's lots of bands and fans although it is more difficult to get shows than it was 10-15 years ago but I guess that goes for other countries as well. Of course we have a rather rich tradition when it comes to death metal, and we still carry the flag with bands like Asphyx and God Dethroned (who are quitting this year, but that's a different story).

You're doing an expansive European tour beginning this week, this starts with a date here in the UK in London, can we expect more tour dates in-between?

Well, we got off to a bad start with the London show being cancelled, but we have an impressive row of (mainly) festivals and clubshows lined up, including appearances at Party.san, Summer Breeze, Wacken, Hellfest, etc. We're still getting offers to play later this year so I imagine we'll be adding more dates as we go along.

What kind of stuff do you have lined up for these gigs?

Metal, lots of it! We don't do any fancy stuff, no theatrics, props or swirling lights, just an hour or more of krushing old school death metal, played like we mean it.

How is life on the road for you guys, does it treat you well?

Mostly yeah, although "on the road" is not too applicable in our situation. We do mostly one-off shows by plane, there's no extensive touring going on. This weekend we're driving to Denmark for the Royal Metal fest, which is quite a stretch but it'll be fun.

So talk to me a little about your album, obviously a concept album surrounding the Pacific War, does this lead from a personal family involvement or what interested you in this particular conflict?

Neither this one nor the debut originated from personal involvement, it's just something that fascinates our singer and lyricist Martin. After tackling the Eastern Front on Of Frost And War we decided to look to the Pacific for the follow-up, we had some doubts at first as to whether it'd be as interesting and involving to European audiences but it worked out well thanks to Martin's vivid treatment of the subject.

Obviously your songs focus on war and conflict, and this runs throughout everything you've done, do you write from a political standpoint or not?

No, when we started this band we all agreed that although we'd be dealing with war we were not going to take any political point of view. Instead we focus on the horror of war, the human suffering on both sides. Obviously we have our opinions on things, but we consider what we do entertainment and there's no political agenda.

Any historians or war memorabilia collectors in the band, things like that?

That'd be Martin, but he doesn't prance around in authentic uniforms or something, he just reads a lot, and I mean a LOT about the subject and he's a walking encyclopaedia of war.

So when you're writing material do you tend to do it as a unit, will everyone work separately and then contribute their ideas at a band meeting, how does the consensus work for you as a band on that?

Despite our old school leanings we're the perfect example of an internet band, we hardly ever rehearse (maybe 6-7 times since we started) and the material is all written at home and shared by mail. I write the bulk of the music (about 70%) and I usually deliver complete songs. The guys will give me their opinion and I work on the material until we all feel it's good enough. The same goes for the contributions of guitarists Paul and Steph, they usually come to my studio to work on new songs so we can make a rough demo and take it from there.

There's no jamming in a sweaty rehearsal room trying to piece together riffs, as romantic as that may seem, it just would not work with our busy schedules. We'd probably need 5 years to get an album together.

Thinking about it now, do you have a particular period or conflict you'd like to write about in the future?

There's a few but I'm not telling which, we already have a pretty clear idea what the next album's going to be about and it's going to be interesting for sure.

Are we going to see you guys back here for the Summer run of festivals and stuff like that - is Download or Sonisphere on the cards at the moment?

Not really, I don't think Hail Of Bullets is exactly Sonisphere material…

You also ran a Karaoke competition recently, asking fans to cover one of your songs, were you pleased with the results and the talent on display?

What impressed me the most was that people actually had the guts to do this and post themselves on the internet, that alone is worth a prize if you ask me. We picked some of the best ones, or the ones that were the most fun to watch, or both, either way it was a fun competition.

Bit of a cliché to end, but what does the future hold for you guys? Do you plan to tour this album as long as physically possible or are you mindful of the next batch of material?

We're not in a hurry so I'd be surprised if we write anything until early next year. The days when you had to have new product out every year are long gone and we're not chasing any trends either so it's fine if we don't have a new album out until 2013. Then again inspiration strikes when it wants, so we might be talking again about our new album next year, who knows?