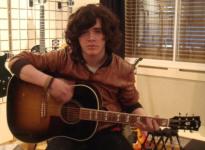 Dundee-based indie punks and BBC darlings, The View shot to fame in 2007. Back with a new album, 'Which Bitch?' but facing a fight to crack the U.S., DMG talks to lead singer Kyle Falconer about the media, song-writing and the NME.

What have you been doing over Christmas/New Year? Any New Year's resolutions?

KF: Getting pissed, just in Dundee most of the time. Not at the famous Bayview (the band was named after the pub), my cousin used to own it so it's pretty bad if we go back! I got a mini-brewery for Christmas, so that I can make my own beer. As for New Year's resolutions, I'm gonna stop squandering my money on shite.

Since the band emerged in 2007, how has life changed?

KF: Life's just normal; we've got an income now so that's the only thing that's changed. We're playing gigs all the time which is what I've always wanted to do.

New album Which Bitch? is coming out in February. How has the single '5Rebeccas' done?

KF: We can't even get it played on the radio and when they do they've cancelled some of the words in it. Some people have been giving us a bit of stick, but we have a new single - 'Shock Horror' - coming out soon.

How did legendary indie producer Owen Morris help the band with this album?

KF: Well he did '(What's The Story) Morning Glory' [Oasis] and 'A Northern Soul' [The Verve], so we have a lot of respect for him. What's he done for us was more of a relationship thing - it's like he's a member of the band. When we first met him we thought he was a bit of a nutter but now we have more of a relationship. We've worked with a couple of producers who were being a bit pretentious but with him we know what's happening with it all. He's on the same wavelength as us.

You and Kieran Webster write all of the songs on the album. How does that work?

KF: Well, everyone in the band does their own bits but the way we work is like, I'll write a bit of a song and then give it to him to work on and it's just like that. We change each others' shit, it's just crazy.
What have you been writing about on this album?

KF: It's all very mystical and majestic. The last one was very upfront and everything we said was true but this one has made-up stories and stuff. It gives you a bit of leeway when you're writing. There were a lot of chances to change the sound and go in different directions, because there's no real limit.

What do you think about Glasvegas? Do you feel that you laid down the path for them?

KF: Just cos they're Scottish is not really fuck all to do with us, is it? They're a good band but neither of us sounds like each other. I met James Allen and he's a really nice guy. I'm glad they've done well.

Paolo Nutini appears on your new album, a track called 'Covers'. How did that come about and what's your favourite song on the album?

KF: He's one of our good friends and he was recording in the studio up above. I had this song which was already recorded and went up to the studio to see how he was doing. We started drinking and asked him to give a song a bash. It sounded great and it ended up better so we redid it.

I haven't listened to the album since it was done, but I really like this track 'Realisation' cos it was hectic – wrote on the spot at 8:30am and everyone was smashed when they were doing it. We were trying to play a cello, holding the bow but none of us could actually play it.

Think you'll be in the NME Cool List this year?

KF: Couldn’t give a shit.

Since becoming famous, how do you feel you've been treated by the media?

KF: Quite unfairly, to be honest. Everyone thinks that we're scallies and we're always in trouble but it's not really that true. Everyone gets in just as much trouble as we do, but it's highlighted more.

And finally, future plans – any tours or festivals?

KF: We're going on tour in February and if we get into America [Kyle was convicted of drug possession in 2007 which may affect their visa claim], but if not it'll be a European tour. We don't know what festivals we're gonna be playing but I'd like to play them all – you cannae fuckin' beat it.

Album Which Bitch? is out 2 February through 1965 Records.