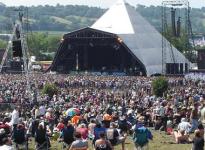 More that 177,000 music fans have descended on Worthy Farm for the UK's biggest annual party. Glastonbury celebrates 40 years since the first festival back in 1970.

The cost of entry may be 185 times that of 1970, but festival-goers don't seem to be put off by the price tag. The festival promises 5 nights of unadulterated fun, live music and - this year - sunshine.
This year's site has been expanded yet again, with more camping added near the John Peel stage, bringing the festial's size to more than 1000 acres.
2010 looks set to be the best festvail weather-wise for several years. Glasto has seen rain every year since those fateful floods of 2005 that prompted organisers to invest £100,000 in improving drainage.

There may well be a few sunburnt bodies this year, but that surely beats a year where some campers were seen diving into Portaloo-infested waters to retrieve their belongings.
As well as good weather, revellers this year can benefit from the brand new air-conditioned 3D cinema tent, plus a bigger cabaret area, for when all that live music gets a bit much.