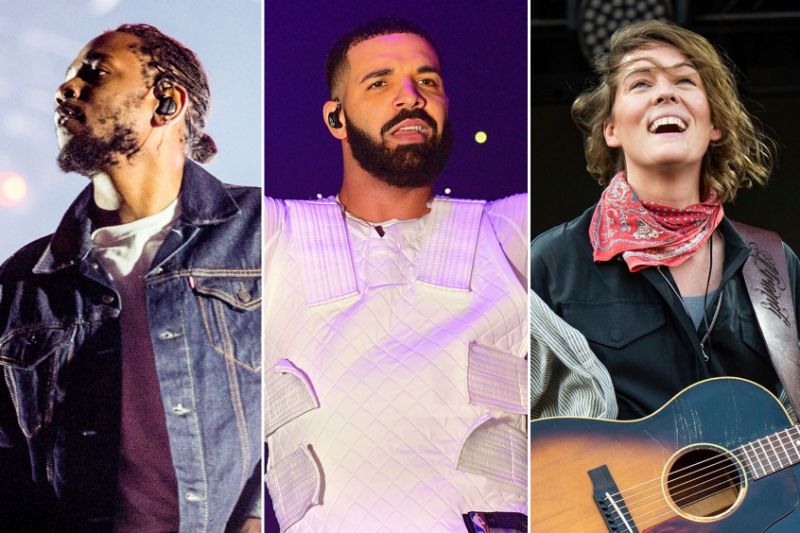 Kendrick Lamar, Drake and Brandi Carlile lead the nominations for the 2019 Grammy Awards. The winners will be revealed when CBS broadcasts the Recording Academy's annual ceremony live from Los Angeles on February 10th.

Lamar's "All the Stars" is up for both Record of the Year and Song of the Year, among six others. For the former, he'll compete against Cardi B, Bad Bunny and J Balvin's "I Like It," Carlile's "The Joke," Drake's "God's Plan," Lady Gaga and Bradley Cooper's "Shallow," Post Malone's "Rockstar" and Zedd and Maren Morris' "The Middle." For the latter, which honors the songwriter versus the artist, Lamar will battle "Shallow," "The Middle," "The Joke," "God's Plan," Ella Mai's "Boo'd Up," Gambino's "This Is America" and Shawn Mendes' "In My Blood."

There is one big change this year that could impact who wins what. For the first time, the Recording Academy has expanded its General Field (Record of the Year, Album of the Year, Song of the Year, Best New Artist) to eight nominees each, meaning that the competition is fiercer. The period of eligibility this time ran from October 1st, 2017 to September 30th, 2018.

The reorganization makes it a lot harder for someone like Drake, the only artist nominated in all three major categories, to make a sweep. But at the same time, there are a lot more overlaps for artists this year versus last year. Where "Despacito" was the only tune nominated for both Record and Song of the Year, six of the eight nominations are the same. The anomalies are Cardi B's "I Like It" and "Post Malone's "Rockstar," which are up for Record, and Ella Mai's "Boo'd Up" and Shawn Mendes' "In My Blood," which could both win Song.

Scorpion, Beerbongs & Bentleys and Dirty Computer are up for Album of the Year but not nominated in the Rap or R&B categories. Cardi B's Invasion of Privacy is up for Best Rap Album, Brandi Carlile's By the Way, I Forgive You is a Best Americana Album contender, H.E.R. is in the R&B category and Kacey Musgraves' Golden Hour could win Best Country. And funnily, the Black Panther soundtrack is a Best Album only contender, though Ludwig Göransson's music for the film could win Best Score Soundtrack. Best New Artist nominees include Chloe x Halle, Luke Combs, Greta Van Fleet, H.E.R., Dua Lipa, Margo Price, Bebe Rexha and Jorja Smith.

Other notable categories include Best Alternative Music Album, where former collaborators David Byrne and St. Vincent are up against each other (and Beck), Pop Solo Performance where "Joanne," a Lady Gaga song from 2016 (but released as a piano version in 2018) is up against a live version of Camila Cabello's "Havana" (and Beck) and Best Metal Performance where, for the first time, there are no genre warhorses in contention. Kanye West, who put out his Ye album this year, is nominated only in the Producer of the Year, Non-Classical category alongside Pharrell Williams, Boi-1da, Larry Klein and Linda Perry.