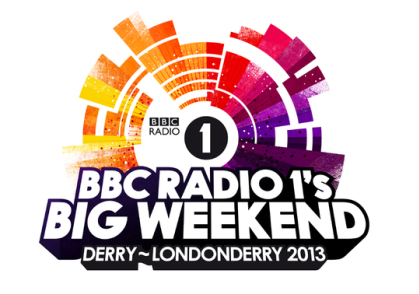 The annual event takes place at the city's Ebrington Square over three days from 24th to 26th May.

Other acts to be announced include Little Mix, Ellie Goulding, Rita Ora and The Script.

Derry last hosted Big Weekend in 2004 and is returning as part of celebrations as the UK's City of Culture for 2013.

Friday's line-up will focus on dance music and BBC Radio 1Xtra, culminating with a headline DJ set from Calvin Harris.

Biffy Clyro will headline Saturday night. Before them there will be sets from The Vaccines, Foals and 2012 Mercury Music Prize winner Alt-J.

Dizzee Rascal, Hayley Williams' Paramore and Olly Murs will also performBruno Mars, who performed at 2011's Big Weekend in Carlisle, is to headline the Sunday night.

Others to perform that day will be The Script, Jake Bugg and Macklemore & Ryan Lewis, whose single Thrift Shop is the best-selling of 2013 so far.

Tickets for the free event have already been allocated.

Their release was delayed for 24 hours in April because of technical issues.

Radio 1 has also said it will work to stop the secondary sale of any tickets.

Jason Carter, the BBC's Head of Live Music and Events, Popular Music, said: "The last Big Weekend in the city in 2004 was a legendary music moment in Northern Ireland and it's so great to be able to return with an even bigger show second time around."

Before the festival, young people in Derry have been invited to attend Radio 1 and 1Xtra's academy between 13 and 17 May to take part in a series of workshops and sessions.