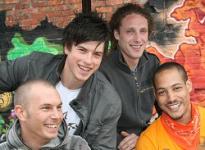 Swindon's much loved homegrown talent the Beatbullyz are on the cusp of breaking into the charts. With airplay on Radio 1 and the main support slot for N-Dubz tour under their belts, the five-piece are making a strong statement with new album Human Nature.

For those in the know though, the album's backbone is material that's been played in hometown venues like the Vic and Furnace for years now. 'Golden City' and 'Keys To Life' are infectiously catchy Hip Pop with synths and strings wrapping around Bozo and Bully's vocal double act.

Their approach is perhaps a little at odds to their association with N-Dubz, although both possess pop sensibilities. The Beatbullyz secret is a unique blend of drum 'n' bass, hip-hop and electronic instrumentation. It's no surprise then that they've moved from winning a competition, playing on Hollyoaks, to working with Kylie producer Jim Eliot within 24 months.

The lean and focused record of just nine songs opens with the aforementioned 'Golden City' where the band's life affirming and positive lyrics take centre stage. Bozo's rhymes paint a picture of the desire to break free from a dead end life; "Every day gotta scrimp and save, so sick of being broke." Meanwhile Bully reinforces the fact that "it's not that hard to find the Golden City", a more positive mental attitude to help you succeed.

Party anthem 'Bounce' moves the album forward by upping the feel good atmosphere. Traditional pop then starts to creep in with the harmonies and electric guitars of 'How The Story Goes'. The other songs all follow a similar template with the exception of 'Skills', which reveals a slightly darker and more underground side with some bigger beats.

The samples and electronic instruments used throughout don't make the material sound like it's been cobbled together in a bedroom. Instead there's a genuine feeling that the band has had a lot of fun crafting the material while road testing songs in front of enthusiastic audiences.

Human Nature is a bona fide pop record then, which features some superb drumming from Disco, impressive vocal performances from both Bozo and Bully, and a potential hit single in 'Heartbeat'. The latter benefits from Lizzy Pattinson's dreamy dance tinged voice. It's a confident album, which will hopefully take the Beatbullyz past the fringes of the pop mainstream.