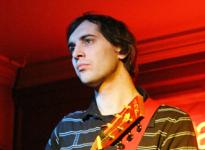 Acoustic singer songwriter Ben Marwood's debut solo album Outside There's A Curse is an accomplished effort. Not only does he create simple and very catchy melodies, but he also avoids the usual clichés of comedic pop culture references in his songs. It's a set of very personal songs littered with a surreal mix of JJ Abrams, Whoopi Goldberg, Avril Lavigne and Darren Aronofsky, but it works.

Opener 'I Will Breathe You In' is backed by acoustic and electric guitars with a slight country twang, it's not the kind of thing you expect from a singer born in Reading. Primarily concerned with lost souls and difficult relationships, there's a sweet sentiment at its core despite the suggestion of an affair. Marwood is obviously capable of dealing with serious subjects rather than just relying on the lighter songs in his repertoire.

"If you don't act your shoe size, act your age", Marwood sings on second track 'Singalong'. It's a song primarily written for a live setting, and it's a lot of fun. "I do not want to live inside this Aronofsky script, I guess that I could be the next big thing, but that would just be weird. So I guess I'll play more folk clubs, but I'd have to grow a beard." There's a very British sense of humour at work here, and that's certainly part of the appeal of Marwood's work.

As the album continues Marwood switches gears a number of times with the alcoholically tinged 'Toil', the ominous 'They Will Float Your Body Out To Sea', the autobiographical 'Oh My Days', and the amusing 'JJ Abrams'. The latter references the film Ghost, 90's cult TV show Dark Skies, and Lost while still being a love song.

Closing track 'The District Sleeps Alone Tonight' is a cover version of a Postal Service song rearranged for a solitary guitar. It's an obscure choice, but it's so good that Marwood's friend Frank Turner has been known to adopt this version as part of his set too.

Marwood isn't a one trick pony then, his stripped back everyman style, suits the overblown silliness as much as it does the more subtle soul searching on show here. Outside There's A Curse promises much as an album, and for the most part delivers a memorable and enjoyable set of songs.