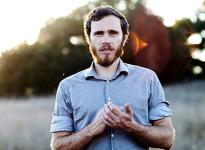 Fresh from a SXSW performance and an American tour, singer-songwriter James Vincent McMorrow's album Early In The Morning has finally been given a UK release, a year after it's initial release in his native Ireland.

Aside from the inevitable Bon Iver comparisons, McMorrow's self produced and self performed album delivers on its promise of delicate and mostly melancholic folk. The carefully layered melodies and multi-part harmonies may also bring to mind Fleet Foxes and Ray LaMontagne, but that's a hallmark of the quality of this debut set of songs.

Opener 'If I Had A Boat' sets the tone both musically and lyrically. A stripped back vocal gives way to a slide guitar and a slowly building and slightly ominous verse before sweet harmonies and an organ wash you away. The track continues to an eventual crescendo of guitars, drums and piano. Thematically it's the ideal starting point, a fascination with lost love and nature (especially water and forests) are demonstrated throughout the following 40 minutes.

'Sparrow And The Wolf' is the first sign of lyrics that will haunt you for days. "Store up your hate, use for warmth when you're cold" McMorrow sings on this surprisingly upbeat break-up song. It demonstrates his impressive vocal range especially in the upper register, and his ethic of taking simple chords and wrapping them in swathes of melodic instrumentation.

By the time 'We Don't Eat' sneaks up on you with it's competing piano melodies, it's apparent there's also a religious undertone to McMorrow's writing. "We don't eat until your father's at the table, we don't drink until the devil turns to dust", he assures you. The dark undertones proceed to draw themselves to the forefront of the latter compositions featured on the album, but they're all perfectly crafted.

The final, and title, track of Early In The Morning brings the record to a redemptive close as new love blossoms as a new day dawns. It shows that there is a consistent narrative to the songs and their sequencing which shines through. Recorded in an isolated seaside home over a number of months, the album works as n emotional journey that must mirror that of its writer in those surroundings. At times heartbreaking and others uplifting Early In The Morning deserves all the praise that it's been garnering.