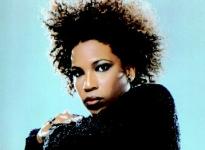 Macy Gray is probably better known Stateside, with only her first two records charting well here. Still with some celebrity backers, she returns.

The opening title track is classically formulated with a thumping beat, much in the style of Beyoncé's 'Halo'. It has a soulful rhythm, powerful vocals and a generally likeable feel, too, which helps. 'Lately' opens a bit like 'Could It Be Magic?' before exploding into upbeat, infectious grooves. This track has 'single' written over it with a synthesized commercial vibe; it's pleasing on the ear.

Gray teams up with rockers Velvet Revolver on 'Kissed It', and they contribute a typically pulsating guitar-led energy, backing up yet another commercially-friendly tune. It's the sort of beat one might give to Adam Lambert, but Macy does rock-chick well, with more soul. 'Still Hurts' is styled like a hip-hop calypso beat with unknown songstress Romika, providing the emo. It actually sounds like something The Saturdays might consider and that should tell you where this goes.

Opening single, 'Beauty In The World', talks of "blue skies and butterflies" and no doubt Magic FM was licking their lips when this dropped into their inboxes. It's just a bit too gooey and typical to really register as anything original. 'Help Me' is somewhat more downbeat and features fast delivery by Gray which works well, complementing its well-timed melodies. It's a bit gospel, but essentially likeable. Gray finally unquestionably ticks the memorable tune box with the standout effort 'Let You Win'.

Old-school James Brown is probably the influence behind 'That Man'. It has more brass than even Mark Ronson would allow and a catchy rhythm that reminds one of The Supremes. A whirring electro buzz accompanies the over-bearing girlfriend song in 'Stalker'. It eventually manifests into a powerful, off-beat soul record. Bobby Brown guests on 'Real Love' and the stars don't shine as bright as they might in this sickly romp which almost breaks down into mindless chanting.

Macy revisits her sharp and echoing growling on the retro electro 'On & On'. The track has 'nice' melodic backing; a thumping, yet invigorating digital beat and some outrageous style. 'The Comeback' ends with reminiscent and remorseful musings over a progressively inspiring chorus. It again flows so well with both rhythm and vocal and the lyrics are pretty much as open and accessible as any other song on the record.

In a cliché, Macy's back! This is a mature, polished and off-the-wall collection of mostly stellar efforts that will both impress and surprise.