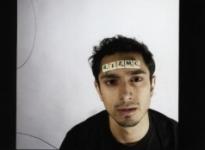 Actors who have tried to live a double life as a pop star are easy to come by. Think of the entire 80's cast of Neighbours. Successful actors who make a meaningful and respectful contribution to music are a rare breed.
Under the moniker Riz MC, Rizwan Ahmed is the latest successful and respected actor to attempt a crossover career. His acting CV boasts turns in the Chris Morris Film Four Lions as well as the TV mini series Dead Set; excellent pedigree indeed. However, will his music output be more akin to Keanu Reaves' Dogstar, or does Riz MC have something to say with his debut album MICroscope?
Having something to say is something this album need not worry about; Riz MC is an articulate wordsmith with the main theme of the album being identity. Riz MC sets his stall out with 'My Radar', distorted bass rumbles underscore a rhyme on individuality and social classification. All is well and good until the chorus, which sounds like an underground version of the 'We Buy Any Car' jingle, this somewhat undermines the entire piece.
It is the backing beats, and melodies (or lack there of) that really let this album down. Often the backing sounds bare little resemblance to the theme of the lyrics. Most guilty is 'Don't Sleep', a tale of getting ready to go and being on a big night out. The backing track plods along and fails to capture any excitement or essence of being in a club. 'Blinded by the Lights' by The Streets has a similar theme, and captures the experience wonderfully, lyrically and melodically.
All too often on the album there is little else to hear but deep, heavy beats and voice, making the listening experience over ten tracks quite samey. There are exceptions and tracks to seek out however; 'Get on It' has an achingly addictive falsetto melody to counter the bass warbles.
MICroscope's closing track 'Sour Times' is the album's highlight. It is also the album's only track to offer organic rather than purely digital sounds; the melody played on guitar and string. Over it Riz MC pleads with the listener to see his view and understanding of Islam. He is fearful of the zeitgeist against his religion, spurred on by politics and the media. It is a thought provoking and powerful song, and one that should be prescribed to each and every Daily Mail reader.
There is a superb and unique British talent here. Unfortunately, it does not necessarily lie under the Riz MC persona.