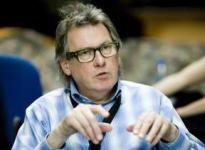 The former Roxy Music saxophonist revisits the past and previews the new with his Avant Garde supergroup at the upmarket gentleman’s haunt.
Since the genre-splitting group disbanded in ’82, Mackay has led a life mainly away from the spotlight, surfacing briefly with The Explorers before returning at the Roxy reunion. Now with a grand comeback planned, Mackay let us into his dark little secret: the instrumental expressionist side project known as The Metaphors.

The stellar line-up consists of classical maestro Julia Thornton on concert harp, best buddies TJ Allen on synthesizer and Hazel Mills on piano and occasional vocals, Roxy drummer Paul Thompson, and Mackay himself alternating between sax and oboe. It’s not quite Bryan Ferry’s baby but the crowd certainly didn’t care as they swung straight into ‘Love Is The Drug’.

On first impressions, it was kind of like 'Guess the Intros' game from TV's Never Mind The Buzzcocks as the harp and piano combined to try and imitate Ferry’s iconic vocals, before the familiar saxophone solo saved the day. And it certainly is a brave move to imitate the man who repackaged John Lennon and succeeded, but the distinguished audience were cheering and whooping as one might at a Roxy Music revival gig.

Mackay and The Metaphors work very much on the basis of atmospheric sounds, experimental fusing and the engaging result that it brings; in parts of the set this worked very well. Taking full advantage of the club's lighting capacity, the band glimmered in and out of darkening ambience and striking light shows. One could imagine they would go down well at a stadium gig or festival with the trance-inducing solos and occasional macabre element.
With first album - London! New York! Paris! Rome! - due out in February next year, the band played tracks presumably to feature on it called ‘Elle’, ‘Waterloo Sunset’ (which Mackay introduced as being about the most beautiful city in the world - London!), and ‘New York, New York’; these tunes went down very well. It may well be Mackay’s band in name but, just as with Roxy, he is happy to step out of the spotlight on occasion, particularly to the talented Mills whose haunting vocals are the focal point of many of the songs this over-capacity crowd were treated to.

Perhaps to distance Mackay from past glories, his oboe is the main weapon of choice, and this was particularly prominent on album's title track, ‘London! New York! Paris! Rome!’. It was a polished performance: the five-piece seemed as if they had been playing together for years as they effortlessly switched into more rhythmic pieces, combining forms of classical music, traditionally-influenced, jazz and electronic styles. In what was a relatively short hour-long set, Mackay spoiled the audience with a short solo performance before returning for a melodic encore which had the crowd on their feet in a gauging and enjoyable performance.

Whilst Roxy fans may feel slightly alienated by the off-the-wall style of Mackay And The Metaphors, its good to see an artist who isn't afraid to break out of their musical comfort zone. This was an eyebrow-raising, yet enjoyable performance from a liberated master musician.