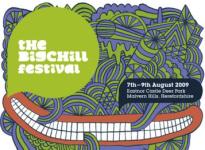 The Big Chill festival has a strong reputation for excellence, not only in musical quality but in an all-roundedness which appeals to all tastes. Having arrived on site on Thursday, we were raring to go on the Friday.

First up, Dan Black played an accomplished set to an enthusiastic crowd who enjoyed the singer's friendly demeanour between tunes. Signature track 'Symphonies' is a corking live piece of pop music; 'U + Me =' is catchy enough to be a popular single. These melodic, string-heavy tracks work pretty well, but when Black tries to be Calvin Harris it all goes a bit pear-shaped. His up-tempo club tunes are a little cringing, so on the whole a pretty ordinary set.

Noah and the Whale's easy-listening brand of nu-folk gave punters the perfect opportunity to sit down by the Open Air Stage and enjoy the afternoon sunshine. 'The Shape of My Heart' can simply be described with the adjective 'lovely'.

New Essex-based band Magistrates have been making themselves heard on the circuit recently, so we headed over to the Coop Tent to check out what all the fuss was about. What we found was a plethora of 80s dance-pop grooves and a lead singer with an impressively high-pitched voice. 'Make This Work', a former track of the week on Zane Lowe's radio show, was stunning.

As the sun set at 9pm, we headed over to the Castle Stage, completely unaware that our lives would forever be changed by an hour of visceral carnage. Chris Cunningham is a renowned music video director, but that is all the information we had as we stood transfixed from the first second of his show. Cunningham's most famous work is with Aphex Twin, a band which is renowned not only for their unsettling music but also for the subversive nature of their videos.

The sight of a naked man and woman punching each other in time to a heavy drill and bass beat, a disabled alien fending off laser beams whilst being held in captivity ('Rubber Johnny'), and a woman being disembowelled to the rhythm of a screeching noise all obviously produced gasps from the immobile crowd. It was unnerving entertainment, leaving you saying to yourself, "Did that just happen?"

We ended our evening with a boogie to Tomb Crew, who incorporated pretty much every genre under the sun to put together a highly entertaining dance-a-long session in the early hours of the morning.

We woke on day 2 of the festival with optimism as the sun was shining, and The Big Chill seemed to us to benefit massively when the sun was out. After a (prohibited) walk round Eastnor Castle and its magnificent grounds, we headed back into the arena to watch Emmy the Great, a folk-pop act whose first album 'First Love' is very accessible and quaint. 'We Almost Had A Baby' and 'First Love' were the highlights of the set, although you really have to like the brand of inoffensive, rather twee country-pop to get through a whole set. It is all pretty similar and can get somewhat dull. Emma-Lee's voice is fantastic though, and 'First Love' in particular is one of the best ballads of the year.

Pharoah Sanders is one of the greatest saxophonists of all time. Probably should go and see him then, we thought. Great if you like 'progressive jazz nonsense', but for this narrow-minded journalist it was a genre too far and it may take a few decades to get my head round this brand of, granted very talented, but completely inaccessible music.

Lamb, on the other hand, got us back in our comfort zone. They reformed for the festival and the crowd were appreciative of their trip-hop Portishead-esque sound. 'Gorecki' and 'Gabriel' were indicators that this overlooked band might still have the potential to return to the music scene with a vengeance.

Orbital proved themselves to be worthy headliners with a show that was as memorable as any other this weekend and had the added bonus of being their first show since they split in 2004. In their alien-style head masks, brothers Phil and Paul Hartnoll owned the stage, bouncing between their decks like kids in fancy dress. The tracks speak for themselves: 'Chime', created in 1989, still stands up as one of the greatest pieces of trance of all time, 'Belfast', made popular in the film Human Traffic, is the definition of ambience, and 'Halcyon and On and On' sounds like the end of an epic '90s club night in the Hacienda. In short, a set to stand the test of time.

Another scorching day brought the festivities to an end in impressive style. We took advantage of the weather and the stunning countryside by again starting the day with a walk around the fringes of the site. Aesthetically this festival really is beyond superlatives.

Heading towards the centre of the arena at lunchtime, we found Norman Jay MBE, one of the most respected house DJs in the country, entertaining the masses with some funky beats. Snippets of Obama's Yes We Can speech were interspersed throughout the set, and when Jay dropped Dizzee Rascal's 'Bonkers', the crowd followed suit.

The Big Chill does not just offer a fantastic variety of music, but the opportunity to listen to world class comedy. In fact one could almost go through the entire festival without watching a single band and still come away with a sense of having had a great time (as our tent neighbours can confirm!) Dylan Moran, Noel Fielding, Russell Howard, Sean Hughes and Tim Minchin all had slots over the weekend, and in most cases drew the largest crowds of the festival. Minchin's set in particular was something to behold. The man is a musical comic genius on par even with the great Bill Bailey. Check him out if you like Bailey or the Concords.

Andrew Bird was one of the finds of the weekend. Having never heard a song of his, we arrived with fresh ears and open minds. We were not disappointed by our findings. Bird was so good that we stayed for his whole set, rooted to the spot as he played about a dozen instruments, all with optimum skill. A song called 'Oh No' was a personal highlight, probably because it sounds like a cross between The Shins and Rufus Wainwright, two artists who shine in their respective camps.

Mali duo Amadou and Mariam wowed the masses with their brand of 'Afro-blues', the sort of music you wouldn't find at your average festival. Damon Albarn produced their most recent album 'Welcome to Mali', but no, they did not cover 'Song 2', much to everyone's surprise…

David Byrne brought his wacky live stage show to the Open Air stage. Everyone was dressed in white, there were always at least three dancers in stage, and at times Byrne himself joined in with the expressive dance sequences. Now this sounds ridiculous, given that the man is over fifty years old, but it was actually quite a fantastic show. His voice is just like it always has, his band were expectedly reliable, and in 'Once In A Lifetime', Byrne possesses one of the truly original songs of all time. Needless to say it was our festival highlight, and fitting that it was the final song we heard before trudging miserably to the car park, having had an incredible weekend.

The brilliance of this festival is partly due to the scale of the place. You can get from one side of it to the other in about twenty minutes so it isn't a massive effort to get around the site. However you never feel enclosed or claustrophobic, which can be the case at the smaller festivals. The location could not be better either. Eastnor Castle dominates the skyline in one direction, and in the other, the hills of the Cotswolds create an exhilarating backdrop, especially at dusk. It was a privilege to be part of the Big Chill experience.