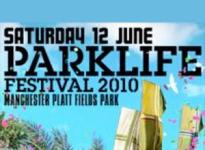 Tight security and strict drug controls meant the bouncers had set up a bizarre game of human lemmings; punters twisted and turned around countless barriers whilst never appearing to get closer to the entrance. Once inside, the sniffer dogs, drugs amnesty boxes and pat downs were all rendered pointless as the air was thick with dope smoke and the wide eyed, gurning Mancs were in full swagger everywhere. Sights and smells like these were to be expected as this was, after all, a Warehouse Project gig celebrating one of Madchesters favourite sons; Ian Brown.
First to take to the stage in this mini one day festival were The Whip. They had been sadly absent from the live scene in recent months due to recording commitments, however this lack of practice had no effect on their enthusiasm and ability to whip (sorry) up a crowd. New tracks were previewed and sounded perfectly at home alongside favourites like 'Divebomb', 'Fire' and 'Trash'.
Sadly the last statement could not be applied to Bad Lieutenant. Bernard Sumner's new band stuck rigidly to a policy of playing one Bad Lieutenant song followed by a New Order track. This caused a very choppy and mixed set and the reaction to the Bad Lieutenant material was deservedly muted, whereas the New Order tracks went down well. Despite having Bernard Sumner on vocals, Bad Lieutenant are really a poor New Order covers band. There was no spark, no spontaneity, no passion and no enthusiasm from Sumner or his band.
Next up was Unkle, who were backed with material from their best album since Psyence Fiction, Where Did the Night Fall. Sadly only one track from their seminal debut made the set and 'Lonely Soul' was not sung by the original vocalist Richard Ashcroft. As Badly Drawn Boy lives just down the road, it would have seemed natural to invite him along to perform 'Nursery Rhyme'. Backed by impressive visuals and a tight band all the material sounded good, if lacking the sparkle of their earlier dance/hip hop influenced tracks. Unfortunately, Unkle's set appeared to be very short and, what's worse, criminally quiet.
Taking everyone by surprise, Ian Brown just swaggered on to the stage with no fanfare or introduction. Cheers were near deafening and the ground seemed to shudder as people stomped to the opening track 'I Wanna Be Adored'. That was to be the last of the Stone Roses tracks until the encore, but the next hour and a half proved that Ian Brown could have headlined this gig without his association to such a band. Solo tracks like 'Golden Gaze, All Ablaze' and 'Corpses in Their Mouths' went down a storm, and thankfully the crowd's enthusiasm was such that it drowned out Brown's fog horn like vocals.
Brown closed the main set with 'FEAR', arguably the best track he's ever penned, and then announced he was 'off for some cheese and biscuits'. He then returned to perform a much deserved encore and sent the crowd into raptures by playing 'Fools Gold'. Sadly though, a trick was missed. Rather than close the set with two new tracks, it would have been logical to recall Unkle and treat the audience to a unique live collaboration by playing 'Reign' or 'Be There'.
Ian Brown's charisma and good humour could hide a multitude of sins. Despite poor sound, appalling vocals, and only two Stone Roses songs, no one left this park in South Manchester unhappy.
Rating: 3.5/5