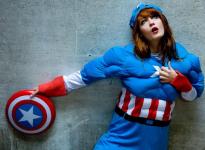 Rounding off 2009 Florence Welch releases the fifth single from her stunning debut Lungs. 'You've Got The Love' may be a cover version, but it isn't a sign that she's running out of ideas.

Originally recorded as a gospel disco song in 1986 by Candi Staton, then sampled to bring it notoriety in the 90s as a house track, Florence gives it a 21st century overhaul here. The beauty of this version is that it treads a thin line between being instantly recognisable, and bringing something new to the mix.

Instead of being driven by drum machines, 'You've Got The Love' now stands as a guitar track. Augmented by harps and pianos, it feels like a song that can no longer be classified into just one genre. It also doesn't mess about either, just shy of 3 minutes it packs a real punch.

Florence's vocal delivery may have lost some of the sheer power and soul of the original, but instead there's a vulnerability and hope that prevails. The soaring vocals here are as challenging as any other track on her debut..

The only criticism would be that 'You've Got The Love' has already been used as a b-side and then a digital only single earlier in the year; did it really need a subsequent physical release?

In honesty yes, because not only do Florence and The Machine sound like they're having fun, but it's a memorable way to wrap up an impressive year for Florence Welch.