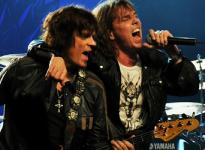 It's a strange situation to be in. Standing on the pavement outside Newcastle's O2 Academy; a busy cross junction of the city centre, and the chords of Diamond Head are beginning to ring out from inside the arena. It's barely half past six, but it's causing the anxious crowd outside to shove that bit harder to try see the NWOBHM legends emerge on-stage.
Inside a dedicated group of youngsters, mostly wearing Metallica and Megadeth shirts, were standing up the front with keen eyes on guitarist Brian Tatler. He was shredding out the opening riff to 'It's Electric'; one skinhead had a tear in his eye. Their set comprised new and old, and 'Sucking My Love' in particular went down a treat. Even though they're not the original Diamond Head, they're still an impressive outfit. By the time the band had rung through the final chords of 'Am I Evil?' some 40 minutes later it was 7.30 and one thing was clear: if they were the support, the headliners had better be amazing.
Less than 30 minutes later Europe emerged on-stage with vocalist Joey Tempest on fine form. The title track from the band's latest album, Last Look At Eden, got things off to a great start; the entire hall was packed with rocking fans of all ages. This U2-meets-Bon Jovi style band have attracted fans young and old, from seven to sixty seven, and their set-list was peppered with hits from today and yesteryear. Classic Europe tracks like 'Cherokee' and 'Carrie' felt right at home with newer songs such as 'New Love In Town' as Tempest chatted with the audience about "canny lasses" and football scores. It's a sign the singer has done his research - a welcome change from most - and has learned to respect his crowd.
Tempest is no stranger to the UK, having lived in London since moving from Ireland, being friends with Dani Filth (yes, THAT Dani Filth) and being married to a British native. Knowing your audience is an advantage, especially when the majority expect Europe to ironically know nothing of the UK, which the politically minded may find quite amusing.
The set was littered with filler as guitarist John Norum proved his incredible solo skills (vintage Europe fans will know Kee Marcello is sorely missed), while long-time drummer Ian Haugland banged some of his own. It was a reflection of the band's talent and energy that kept the crowd waiting for more. But there was time for some fun, too, with (ever-so-delicate) Queen and Paul Rodgers covers. Tempest acknowledged the Bad Company fans in the audience, of which there seemed to be many.
By the time the band had begun to wind down their 90 minute set (one which, to be honest, flew by) it was obvious what was to come next. The encore of the night belonged to 'The Final Countdown'; there was an anticipated excitement like no other as keyboardist Mic Michaeli let loose for what is still possibly the greatest keyboard intro in rock and roll history. As the crowds diverged from the venue there was a wonder if the band needed to play that song at all. Europe's amazing performance proved the night had been anything BUT 'The Final Countdown'.