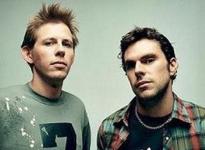 Groove Armada made their long-awaited return to Manchester on a mini-tour to promote their new album, Black Light. With recent singles 'Paper Romance' and 'I Won't Kneel' seeing the duo move towards electro-disco, Groove Armada are looking to re-launch themselves with their first studio album since 2007.
With a discography spanning over twelve years and a multi-generational fan base, the dance act were at The Ritz showcasing their, at times, achingly fashionable sound. Lead vocalist Saint Saviour set the scene, strutting onto the stage in a gold and black leotard which was more Ancient Egypt than a rather chilly Central Manchester.
Renowned for their live shows, a relatively restrained set allowed the audience to focus on Saint Saviour and her sensual robotic grooves. Her punchy voice and eighties-inspired synth-pop brought a power ballad crossed with disco edge to the affair. And welcomed it was, too!
Opening with 'Look Me In The Eye Sister', the night started with a thumping beat overlaid with a menacing darkness that permeates much of the album's new material. 'Warsaw' and 'I Won't Kneel' highlighted Groove Armada's perfectly produced new sound, while the band took the opportunity to drive home the pounding choruses at every opportunity.
'Paper Romance' saw the first of two special guests in the form of Ben from 'Fenech-Soler'. His vocals merged effortlessly with Saintsaviour's to take the audience back to the era of Top Gun via the dance-floor. Inevitably, there was a desire for the older material, and the band duly delivered. 'At The River' and 'Easy' sent the crowd wild and brought back memories of the sheer musical quality the band are well-known for.
MC M.A.D., the second special guest, was given a hero's reception every time he stepped foot on the stage. The cheers turned to delirium as he ripped into one of the biggest tunes of the night: the flawless 'Superstylin'.
The new tracks boded well with an appreciative audience and show Groove Armada's desire to expand beyond the chill-out and house beats that defined their earlier work. There was no pretension in the audience and the addition of MC M.A.D. was what the fans had hoped for, but not expected. When a band takes as much care catering for their fans as this, it's easy to see why they have such a well-deserved reputation for their live performances.
Rating: 3/5