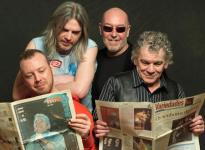 Most current music fans will have probably first heard of Nazareth through Guns N' Roses, who covered the band's 1975 hit 'Hair Of The Dog' on their own 1993 album, The Spaghetti Incident, to worldwide acclaim.
The night's support came from The Deborah Bonham band, the sister of the late drummer, whose adequate but rather extended set brought the crowd closer to 9pm by the time she finished. Despite having only recorded two albums since her career began, she's been involved in music almost her entire life, a stand-out track being the almost amusing and country ribbed 'Shit Happens'
Dan McCafferty's vocals were on fine form as the band kicked into their 90 minute set. Throughout the course of the night revellers were treated to a classic Pub band set, hit singles and classic melodies mixed with newer material. Top 10 singles such as 'My White Bicycle' and 'Bad Bad Boy' reminded of the influence this band had on the charts, back when it mattered, and when the only music you could buy was on vinyl.
By the time 'that' track got played, Dan was playing a pair of bagpipes, and had the crowd at his fingertips - his performance nothing short of legendary. Following this, the entire hall went silent, a performance of 'Love Hurts' followed and had the hair standing on the back of everyone's necks in the room.
An all out rock fest was complemented by the guitar playing of Jimmy Murrison and pounding rhythm of Pete and Lee Agnew on bass and drums respectively. Before that final song, 'The Flight Tonight', Dan assured the crowd they're not through yet.