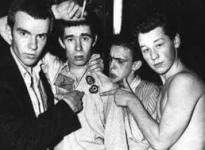 The scene was set within a tightly-packed underground bunker, festering with 40-something males awaiting the arrival of a transporter to their times. Sham 69 are somewhat overlooked as yet another band on the road to Oi punk pandemonium. However, inverted through their intrepid musical ability, they are capable of projecting more than the zestless anthemic simplicity commonly associated with the genre.

They began with a touch of humour, and entered with 'Land Of Hope And Glory' ringing from the stage before they immediately launched into a set list jam-packed full of familiar tracks, largely taken from their more famous and well-known earlier compilations: I Don't Wanna, Angels With Dirty Faces, Questions And Answers and Hersham Boys, each dedicated to its own societal cause.
Although in danger of being blemished with football-chanting, there's enough variation in there to avoid a distasteful, cyclical occurrence. In between songs, Tim V (vocals since 2007 following original member Jimmy Pursey being allegedly sacked from the band) entertained: "We are all gonna be skinheads, why fight it while mother nature takes its effects?"

Recently premiered to the Irish, 'Ulster' contained a prolific riff and Parsons' intermittent solos; the kind of technical snippets and interludes which make Sham more than mere boisterous Oi sharks. A group wholesome and enhanced through it's live performances. 'Hey Little Rich Boy' was a catchy chant, but criminally curtailed in length.
Another band which attributed to dead friend Strummer, their 'White Riot' cover was a rowdy number. 'Hurry Up Harry' is ridiculously loveable, a track later re-recorded as the official England football team song for the FIFA World Cup in 2006. There were a couple of 'Jimmy' jokes thrown in before the lethal 'Borstal Breakout'.

Sham may not cut it in the art school of complexity, but they have some of the greatest raw molten glass talent. Al Campbell (originally UK Subs) isn't just a punk bassist and Parsons is 30 years in the making. Just when you thought there may not be much more on the table, Tim announces that there's a movie out next year. You didn't see that one coming, did you?