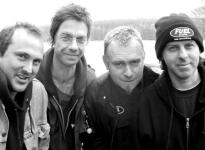 On a night of old school anarcho-punk palestricals, Wiltshire Wessexers Subhumans took to the stage at a vampirish 11.45pm for a set list packed full to the throttle with 80s favourites and newer songs off their latest 2007 Internal Riot album release. It was an unmissable night of dissonant charm to finish off 2009 in chaotic splendour.
To this day they have maintained their original membership: Dick Lucas on vocals, Bruce on guitar and Trotsky on drums. Even Phil on bass is almost an original O. Adroitly expanding the could-be restrictive nature of the anarcho-punk summation, Subhumans rolled out the horizons with tougher takes on mere socio-political heritage born out of a doom and gloom time pocket.
Once sharing the arena with the likes of fellow Wessexers A-heads and Organized Chaos, Subhumans bred ideas from pedigree stock band Crass and were signed to original anarcho conquistadors Flux of Pink Indians' Spiderleg record label. Combining the metallurgy of anarcho with the 70s DIY hardcore culture of 'music by people like us', Subhumans desecrated the lead tablet of simplicity.
And their music is testament to this very nurture: accelerating tracks of gutted crust, spat out through bassy scaling and larynx debilitating vocals. The inaugural song was 'All Gone Dead', with more ruckus following in its wake: 'Killing' and ska-spun walking bass tracks 'Word Factory', 'This Is Not An Advert' and 'Waste Of Breath', paralleling Lucas' other band, Citizen Fish.
On the other side of things, songs like 'Big City' maintained fresh hardcore trends similar to Dead Kennedys classics, streaming earth-bewildering guitar spy music radiating conspiratorial twists. Subhumans played out variation fresh from the can: tempo flashing moods, sludged sub-sects and devious guitar riff caterwauling. The premises of blistering rage still froths at the rim.
The night isn't complete without the early works from The Day The Country Died: 'Mickey Mouse Is Dead' with its staccato sanus, 'Black And White' and 'Til The Pigs Come Round'. The classics continue with the flouting chorus of 'Religious Wars'. They finish on 'Evolution' - pasting yet more Lucas pagefuls of social insolence to jam your pockets full of wits.