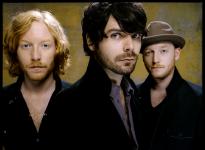 'God and Satan' is an obvious single from Biffy Clyro's most recent album Only Revolutions, a bittersweet mid tempo ballad that relies more on strings than stadium rock, it's a sure fire way to win airplay.

Then there's the small fact that it's the sixth single from the record, that's a feat seldom reached in today's digital world. The release date may share a year's anniversary with 'That Golden Rule', but add in the band's recent Mercury Prize nomination and the reasoning starts to fall in to place. To quote the track itself; "Does that make me cynical?"

Ignoring the context in which it's been released, 'God and Satan' is a great single from a band that's consistently delivered thoughtful and challenging material over the last few years.

Simon Neil's vocals are full of regret backed by a solitary guitar for the first verse. "I talk to God as much as I talk to Satan 'cause I want to hear both sides". It's a song about opposing ideas and how they shape you. Some of the religious imagery could be seen as a little clichéd, but lyrically the track seldom seems heavy handed.

The remix adds strings and buries the vocals slightly; detracting from the contribution of the rest of the band and leaving the album version as a superior recording. But in all honesty that's only a minor complaint because at its core, 'God and Satan' is an incredibly strong single.