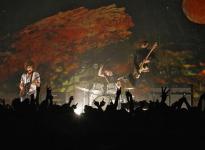 Listening to Wolfmother has always been akin to stepping back to 1976, listening to a band playing to a tiny stage of teen headbangers and wondering just why the crowd for these riotous axe-slingers is so small...before realising that it is due to them being sued into oblivion by Black Sabbath and Led Zeppelin for rampant plagiarism.

As for this latest effort, though not as familiar, you can be fairly sure it was pilfered from the great British/American 1970's classic-rock songbook; despite having an opening melody reminiscent of an ice-cream van. The band, essentially now nasal vocalist Andrew Stockdale and friends after both former founder members left in 2008, unfortunately do not continue in this cheery vein, and instead we are treated to a lolloping, quicksand, pudding of a dirge.

Stockdale either does not realise his musical output remains sigh-inducingly derivative, or does not care. The lyrics are so tired and uninspired you feel like they are stuck in a dead-end job they can't escape. The tragic part is that this track is far too plodding even to make it into the latest version of Guitar Hero.

'Far Away' is where you may wish to be when this is playing, and, if you are a humanitarian, advise others to do likewise, in the hope that it may force the band to either vanish, or adopt a character not based on riff recycling and lyrics lifted straight from the book of cliches.