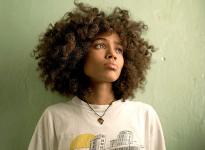 So it's been "up there for thinkin and down there for dancin" for too long, and now it's time to mix it up and try both at the same time.
If it sounds like a challenge too big for your boots, have no fear, Nneka makes it very, very easy. Smooth vocals and a wicked hip-hop beat this woman is politically charged like a musically laden pack horse with a chip on its shoulder. A top twenty already in the bag with single 'Heartbeat' (and a dirty remix of the same by Chase and Status), yet again the UK knows where it's at when it comes to great new music.
New single, 'Walking', which is on her re-released (for the US market) album Concrete Jungle, has all we have come to expect from the half Nigerian, half German jewel: a sweet voice pushed aside by a punchy fast paced chorus with a hip-hop/reggae influenced beat. This song is catchy but not quite enough to risk becoming annoying. Reminiscent of M.I.A's 'Paper Planes' but much much better. Nnake is definitely one to watch.
Don't be shy. Perhaps, like many, you should start by patting your head and rubbing your tummy until you're ready to move on to the hard stuff.
Rating: 5/5