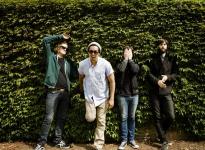 The success of 'Sweet Disposition' lay in the fact that it didn't sound like every other 'nice' indie song (see Snow Patrol, Scouting For Girls, etc.). The electrically played, folk-influenced, guitar sounded fresh; as did singer Dougy Mandagi's unorthodox vocal delivery. New single 'Love Lost', unfortunately, takes a step backwards and places the band in safer territory.
Maroon 5 keyboards start the proceedings before the chord, chord, chord guitars take us to the forced emotional landscape of the chorus. The song screams 'use me on a soundtrack', and no doubt will be used on a cheap 500 Days of Summer clone. 'Love Lost' is also perfectly timed to be used as the music for ITV's montage when Australia were knocked out of the World Cup.
This said, singer Dougy Mandagi does have a strong, soulful voice with a decent range. Plus there's nothing truly terrible about 'Love Lost'; it's just not exciting. If you liked 'Sweet Disposition' and 'Love Lost' also ticks a box then you should get The Temper Trap's album 'Conditions', as by the evidence shown here it will be 'nice'.
Rating: 3/5