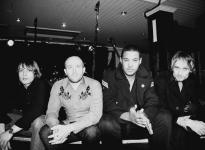 It’s clear that the Mozfather has inspired this young group of lads. Lead singer Peter Smith sings about depressing subjects: "They can only betray you/Calling all the killers- justify your name." Meanwhile, the riffs that accompany probably wouldn't trouble the likes of Johnny Marr too much, but it's clear from the opening track that the band has potential. Complex, thoughtful lyrics are delivered in a deep Morrissey-style over reasonably catchy riffs.

Second track 'We Should Be Dead' continues in this mould, with Smith bawling: "I wish we could die together/Silent screams forever." While it verges on catchy, mostly it sounds like a poor man's version of 'The Queen Is Dead'. It's not as memorable as the first track, and with the Smiths comparisons, frontman Pete Smith's voice sounds more like Disturbed lead David Draiman after a night out on the tiles.

Third and final track 'Bare' starts a bit like Animals' classic 'House Of The Rising Sun' but ventures down a much more versatile rock path, which actually works very well. Smith's vocals are better employed singing powerfully before dipping up into a higher tone, which complements the flow of the track.

Again, it's melancholy-influenced lyrically, but it also features a stronger guitar riff. Perhaps Silversky should seriously consider taking a direction similar to this one and going further away from the underground style of the over-aforementioned Manchester legends.

Altogether, this is actually a very decent start for a debut EP. If you lived in a sound-proof cave for the best part of the '80s and '90s, they may well sound very fresh to you, but frankly, Mr Shankly, it would be best to stay away from the past in the future.