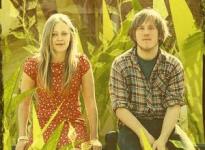 A fully-fledged musical rhythm masterclass is in session, with Jacob providing synthesizer beats, melodic guitar and the X-Factor sound-a-like Victoria utilizing keyboards and a glockenspiel. It's an eclectic showcase.

Opening track 'Clash' is an understated reflective classic. With all the reflective charm of Bloc Party, a ridiculously catchy progressive beat laces between Victoria’s scathing vocals predicting a "clash, clash, clash" before returning to their innocent roots, it is without doubt the best opening track on an EP for some time.

Second track 'Lion-Hunting' gives Victoria's voice somewhat more licence to roam. Showing off even more range than perhaps the likes of Vickers could dream of, it takes you on a trance-inducing melodic journey. Though it doesn't fully hit the dizzy heights of the opener, it does the job and shows that there are more strings to this duo's musical bow than in the whole of the London Symphony Orchestra.

Third up is 'Baram', which again is about as far outside the box as you could wish for. The melodies are so simple in their sound but seem to create a much deeper experience - a comedown soundtrack in a box or a sleeve, perhaps. It features, of all things, a John Motson commentary sample heralding West Bromwich Albion's miracle survival in the Premier League. Victoria and Jacob securing a recording deal would seemingly need significantly less of the Midas touch than Bryan Robson ever had.